Since you’re reading a blog that writes about productivity and organization methods, chances are high that you’ve already heard about President Eisenhower and his matrix. His method for sorting his day is the closest thing the task management industry has to a pop icon.

Why is the Eisenhower matrix so revered? For one, President Eisenhower was skilled at making tough decisions in high-pressure environments. He also accomplished massive, long-term planning projects, such as the creation of NASA and, of course, running for and being elected President.

Every day, President Eisenhower would write down a list of the tasks that he wanted to accomplish. After, he would sort those tasks on a quadrant ranked from ‘urgent’ to ‘not urgent’ and ‘important’ to ‘not important.’ Another name for this matrix is the ‘Urgent-Importance matrix.’ It’s also been called the ‘Eisenhower box.’ 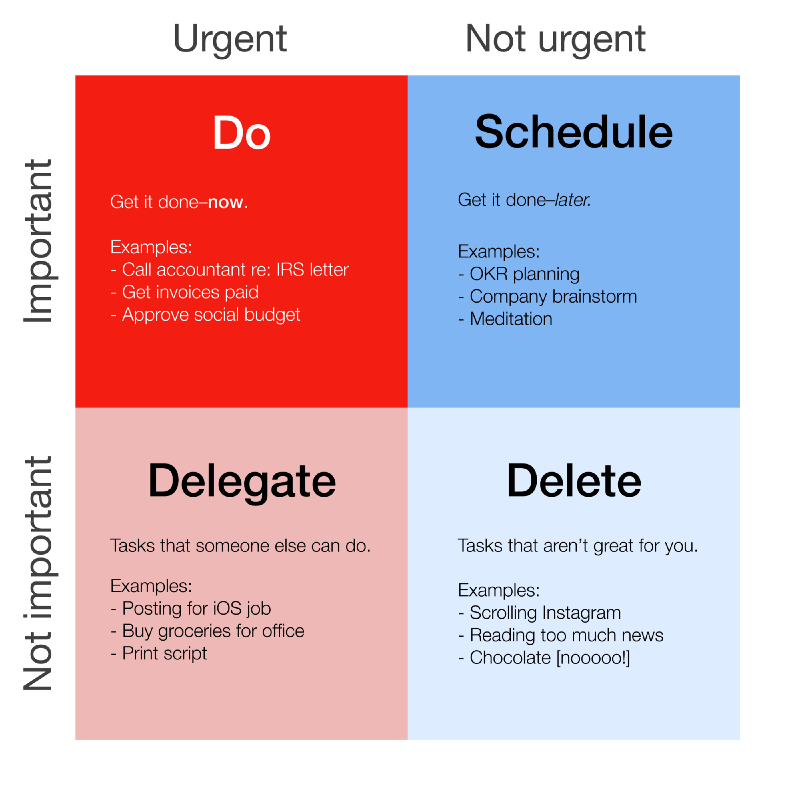 An important hallmark of this planning process is the ability of its user to avoid the urgency trap. By highlighting the four different options, and actively working on self-discipline in the ‘delete quadrant’– there’s a chance that one can accomplish the forever unattainable ideal of getting more done by doing less (or at least come pretty close).

How does one make an Eisenhower matrix using TeuxDeux?

We at TeuxDeux love the Eisenhower matrix because it appeals to our philosophy — simple list, simple life. Being organized should be easy. You shouldn’t be working to plan how you’re going to work.

Here’s the thing: time management is a life-long struggle. Your entire life can be thought of as an almost infinite web of decisions for what you’ll be doing in each and every single moment — until you’re out of time.

We like the Eisenhower matrix because it promotes delegation, a skill that is required for an effective life. Too often, people focus on, ‘getting it all done,’ when one of the most useful tools for efficiency is actually, ‘I’m gonna let you handle that.’

So, how can you set up the Eisenhower matrix on TeuxDeux? You’d use your timeline for urgent tasks and those tasks which have already been scheduled. Your TeuxDeux timeline will act like both a calendar and a to-do list, with scheduled events listed on their respective days and urgent tasks listed on the current day. 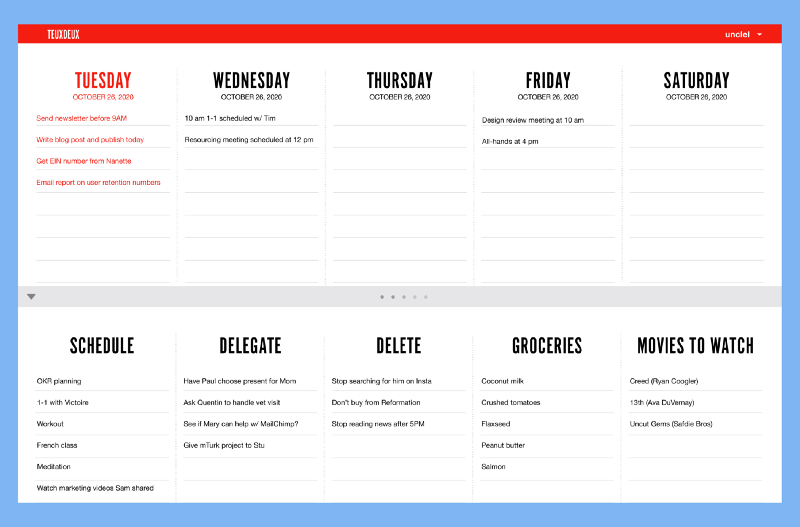 For items that you haven’t scheduled yet, but know that you must schedule –you can create a ‘someday list’ titled ‘Schedule’ that will live below the timeline of your homepage.

You’ll list out all the tasks on your horizon in their respective categories. When you’ve accomplished a task, simply cross it off.

With the ‘Schedule’ list, you can drag tasks up to their planned time and date once you’ve scheduled them. For the ‘Delegate’ list, we suggest that you quickly add a time to make sure the task was completed before you cross the delegated item off your list. Use your ‘Delete’ list not as tasks to be completed but as reminders to stay disciplined and on track. Fill it up with your biggest time-sucks.

We like the Eisenhower matrix because, ideally, if you are subscribing to its level of scheduling and delegation, you won’t have days filled with urgent tasks too often. Urgent tasks are the most likely agents of chaos in an otherwise calm day.

And at TeuxDeux, we have one simple goal: to help you focus on what matters to you. Productivity pays off when it’s accompanied with calm and balance–getting a lot done at breakneck speed is going to lead to mistakes now and burn-out later.