There’s a reason people have been writing to-do lists since before there was paper–life is complicated, the human brain is messy, and sometimes you’re going to forget important tasks.

If you’ve missed another due date and need to get better at task management, or you just want a new tool for your to-do lists, you likely know that there are a billion options for task managers, and each one has trillion features. Trying to choose a new task management app can feel about as overwhelming as implementing a new organization system for your work life. But getting organized doesn’t have to be stressful. In fact, it should be easy.

Read on as we explain why you need to rid your mind of pending tasks, how you can get more done with less work, how to avoid the task labyrinth, and find the task manager that will make it easy for you to get organized and stay focused.

We’re TeuxDeux. We spend every day focused on how to make a to-do list app that’s both flexible and easy. TeuxDeux can suit all your needs without making you work to get organized.

Our product philosophy is guided by one clear goal: simple stays organized. If you want an organization system that will last, you need something easy for you to implement and continue using for years to come. For simplicity, nothing beats a piece of paper–except a piece of paper that can be magically accessed by you from anywhere. So that’s what TeuxDeux is: simple, syncing paper.

Our CEO, Cameron Koczon, once said, “I know people probably love the meditative nature of throwing away a part of a tree, but we sync everywhere so you can’t lose us.” We’re a pretty decent alternative and far more climate-conscious choice for those who can’t imagine giving up their pen and paper.

A few of us TeuxDeux team members would call ourselves ‘procrastinators,’ or ‘lazy,’ or ‘messy’ (while others are definitely Type-A descendants of Tracy Flick), but none of our unique productivity styles detract from TeuxDeux’s effectiveness. By subscribing to our task manager’s homebrewed ‘keep it simple, stupid,’ principle, you’ll be more focused, more productive, and more peaceful while doing less work. That’s the dream, right?

Almost every job involves task management, decision-making, and navigating interpersonal dynamics. But the problems we grapple with at work are more complicated than ever now that we’ve entered a pandemic, economic recession, and near-universal remote work for non-essential employees. Task management needs to be the least complicated part of your day. It should display your day’s items clearly to let you be more productive. This clarity will also make you a better decision-maker and colleague as you eliminate internal mind clutter, allowing you to focus on what matters.

Cal Newport calls the attention we pay to a flashing notification on our phone before returning to work, ‘attention residue’ since that brief interaction holds our focus for some time after it occurs, barring us from giving the totality of our brainpower to the task at hand.

Similarly, we believe there’s a mental weight to pending tasks. Retaining all the things you have to do while doing other things will lead to monkey-mind–where your brain is uncontrollably jumping from one thought to another. Monkey-mind, in turn, will cause you stress and anxiety.

When you clear your mind of all those pending tasks by capturing them on TeuxDeux, you’re able to focus entirely. Therefore, your work will be more peaceful. That peacefulness will lead to you doing better work and help you avoid bad habits like multitasking. You’ll be more productive not because you’re getting more things done, but because you’re more focused.

The basic principle is straightforward: write down everything you have to do or might want to do.

Those lists are accessible for you everywhere–web, mobile web, daily emails, iPhone app (and an Android app, we promise, someday soon).

4. Move to-dos from the someday list to the timeline as they arise.

5. Cross off to-dos when completed

To stay simple and effective, we’ve kept TeuxDeux clear of many of the bells and whistles that we think muck up a time management tool (and thus your focus). Yup. There are some standard features of to-do list apps that we don’t give you on purpose. We’re friendly folks, but we’re not people pleasers.

When a productivity app has everything: subtasks, note-taking tools, shared lists, due dates, reminders, habit tracking, commenting, and so on–it’s counterproductive. Their customers are at a very high risk of creating something we call, “a task labyrinth” from all those features.

A task labyrinth is when you have many tasks to do, and you’ve spent the time to write down those tasks, but when the time comes to do them–you have no idea where those tasks are, or you’ve forgotten that they even exist. In this case, your task manager has not solved any of your problems; it just gave you a brief respite by letting you free your mind of pending tasks. And now you’re more anxious than ever, worried about what list items you might be forgetting.

With TeuxDeux, you can see every list item you’ve created in one clear view, all able to be dragged and dropped onto your timeline whenever you’re ready. This way, TeuxDeux behaves like your map for getting things done instead of a labyrinth. You have a single, shining repository helping you stay focused.

So, what have we left out of TeuxDeux to help you avoid the task labyrinth?

We don’t have due dates, though you can place a to-do on the day a task is due and set recurring tasks to remind you if you really need one. You could also create a ‘someday list’ where you can quickly check any upcoming due dates. We’ve avoided implementing due dates because due dates only signify when the work must be completed by you, not the process of you doing the work.

We don’t have subtasks. You can create a system for those yourself if you like using Markdown like so: 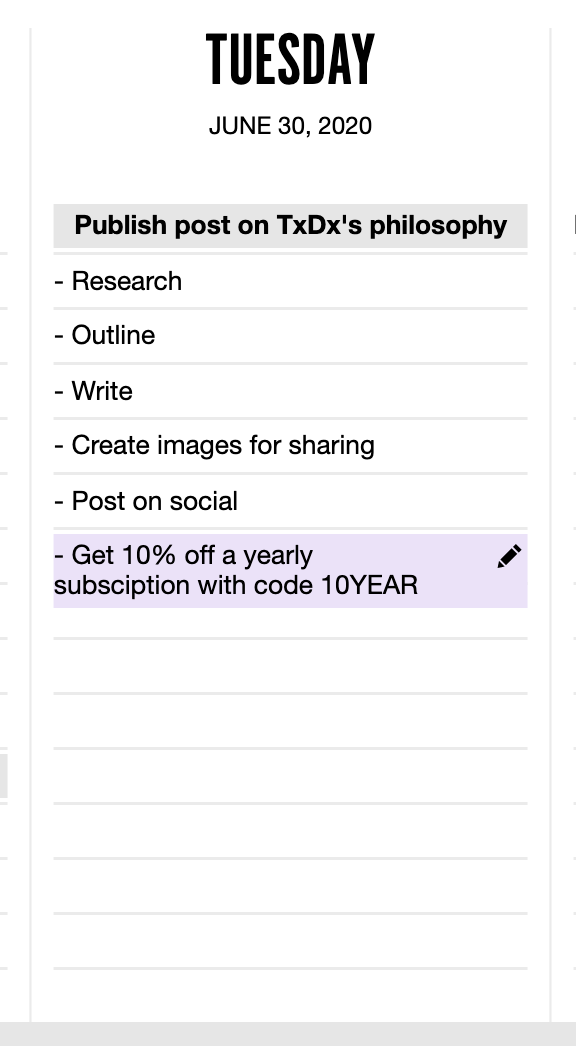 However, we recommend that any task with subtasks is too large to be a list item. For example, a list item like ‘plan the conference Kinference’ is enormous–we have to book vendors, sell tickets, create marketing. Instead of making it one list item with subtasks, it should be a someday list with subtasks listed on it. Like so:

You can drag and drop your list items onto your timeline when you’re planning how you will spend your day.

We don’t have notes for to-dos. If your to-do requires note-taking, you’re likely trying to plan a project of some type, and we suggest a project management tool like Notion or Trello instead.

We don’t currently let you share lists, but…well….stay tuned. We’ve figured out a great way to share lists while keeping everything as clear and straightforward as ever.

One last thing: We keep our subscription price low. You get a free 30-day trial. (We also have a secret snooze button…). After that, it’s currently $36 for a year and $4 per month if you prefer to pay monthly. We try to keep our prices low because we believe that having the resources to be organized should be attainable by anyone.

We pride ourselves on being unbiased(ish) when looking at our competitors. So, here’s how we compare to some of the leading task management tools across the web:

“Organize it all with ToDoist” is their current tagline. They have sections, subtasks, notes–all that jazz. We think this task manager is pretty great if you’re looking to combine project management (with their ‘share tasks’ functionality) and personal improvement (stats and progress charts).

If to-do list apps were people we knew in high school, ToDoist would be the captain of the cheerleading team. She’s beautiful, pretty, and doesn’t know we exist.

Toodledo is a task manager that describes itself as having ‘a stack of tools’ for you to optimize your productivity. And they’re right. The product is a little bit of everything–a place for note-taking, subtasks, habit tracking, ways to share lists with team members, and comment. It’s a task labyrinth, beware the Toodledo minotaur. Toodledo has a free version, or it’s $36 per year to subscribe, which will give you access to all app integrations, the ability to share lists with team members, and unlimited list items.

If task managers were people we knew in college, Toodledo would be our sociology professor who drove a car filled with books, files, briefs, and research papers.

Slack’s product is pretty antithetical to our work habits and philosophy. We don’t use it with our team members on TeuxDeux because we found it created an expectation that everyone should be available to their coworkers all the time. It’s crazy to us that their tagline is ‘Be less busy.’ Their user experience is a dizzying array of tools to optimize your workflow and connect with your colleagues. You can use it as a Chrome app, desktop app, mobile app, iPad, and tablet app; the list goes on and on. It’s a robust tool that can handle everything from team conference calls to task management, which is cool but not our style.

If productivity apps were mythical sea beasts, Slack would be a Kraken–taking over every aspect of your workflow and drowning your work-life balance.

We love Google calendar when it comes to creating events and setting reminders on those events, so you don’t forget to splash some water on your face before that 10 AM Zoom meeting. Google Keep, however, gets complicated as there isn’t a way to aggregate tasks across different email addresses or a calendar view. Google Tasks does give customers a calendar view, but honestly, at this point, we’re too lost in the labyrinth to comprehend it all.

If Google Calendar, Google Keep, and Google Tasks were cartoon characters, they’d be Huey, Dewey, and Louie. And you’d be Donald Duck.

Omnifocus calls itself a productivity tool for professionals. And they’ve got everything–a Mac app, a web app, an iPhone and Android app. Their homepage reads, ‘Your brain just got a big upgrade,’ which might be accurate, but our brain also aches thinking of how long it’s going to take it to figure out their system. It’s $99 for the macOS app or $10 per month for iOS and macOS.

If these apps were humans, Omnifocus would be Joe Rogan–data-driven, trying to give you ‘hacks’ for life, and selling expensive wares.

Wunderlist got acquired by Microsoft and discontinued in May 2020. RIP. We built a Wunderlist importer for our web app if you want to bring your data to TeuxDeux. We don’t import everything–we create someday lists out of lists with subtasks and place list items with due dates on their scheduled day. Microsoft made Microsoft To-Do as a replacement for Wunderlist users, but you have to use it with a Microsoft 365 subscription, which starts at $60 per year.