The survey: a relatively quick 10-question survey seeking to understand what the folks who use TeuxDeux a whole lot love and don’t love about the product, also airing out any other (TeuxDeux related) burning thoughts and desires.

The surveyees: over 100 TeuxDeux users who completed 200–600+ actions on the app over a 2-week span. (“Actions” meaning creating new tasks, moving tasks, crossing things off, etc).

What do they do?

Because we’re nosy, we’d love to know what exactly these people spend their days doing. What do they eat for lunch? What do they talk about at the watercooler? Where’d they get that fun mug from and when do they plan on returning it to its original owner?

For now, we’ll just have to make inferences based on what they say they do for work.

Maybe unsurprisingly, given our roots as a product and a team, a solid chunk of these TeuxDeux’rs identify as working in creative fields (27.6%). Under the “creative” umbrella lies everything from novel writers and copywriters to painters, illustrators, designers, and photographers.

While it’s easy to say that this industry makeup is a representative sample of what the larger user base looks like, it should also be considered that this is the group of users who are most active on TeuxDeux. So, while there may be a relatively substantive number of people working in administrative position represented in this survey, there is the chance that it’s just as (or more) indicative of the nature of their work and volume of tasks as being a representative sample.

It’s worth mentioning a noticeable correlation between those in “creative” fields and those who identified as freelancers or contractors, which in many cases, involves additional tasks like self-promotion, onboarding, and financial admin. 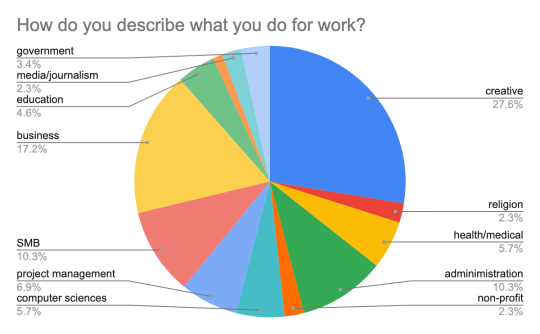 While the pie chart above shows broad categories, we had the survey takers write in specific descriptions of their work.

Amongst TeuxDeux users, there are lots of multi-hyphenates (“Receptionist-Illustrator-Animator-Painter”), stay at home parents, doctors (including a doctor who specifically treats livers), CEO’s, a pastor, a pilates instructor, and an astrologist.

In asking them what types of people they think would most benefit from TeuxDeux, we got a lot of broad “everyone” and “busy people” answers, but also more distilled versions, like “people with lots of freedom in their job who need to create structure” and “people with rapidly changing lives and schedules”.

One that stuck out because it contained an interesting insight was: “people who have a hard time moving to a digital platform for managing their life”.

We’d like to dive a bit deeper on what it might mean to have a “hard time moving to a digital platform”, but our guess is that this is referring to the barrier to entry for most task platforms. When a tool has seemingly infinite customization and settings, it’s easy to caught up in the set-up, instead of in the actual doing (especially if you’re prone to perfectionism). The tool becomes a task.

We don’t want to be another task; we just want to help you cross off the ones you already have.

What would make TeuxDeux better?

While we’ll always stick to our minimalist roots, there’s always room for improvement. 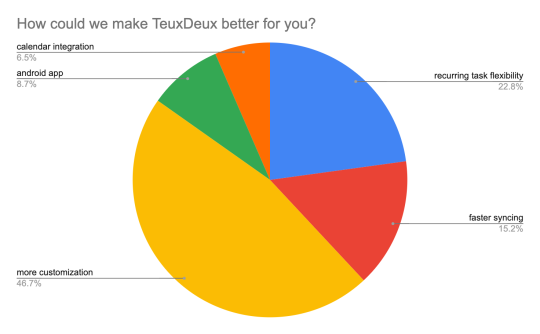 Not all to-do’s are of equal priority or category, so whether it’s a matter of color-coding, differentiating work vs. personal tasks, or allowing a variety of fonts, users would overwhelmingly like more outlets for customization.

We’ve found with previous data analysis that users who set a custom color at onboarding convert from free trial to paid membership at a higher rate, indicating that there’s something about the ability to customize and make something “yours” when it comes to having a desire to use the tool in a committed way.

More flexibility in terms of recurring task time frames and faster synching between mobile and desktop were also commonly requested features, and between this survey and other various feedback outlets, we get a lot of Android app requests (we hear you!).

Simplicity is at the very core of TeuxDeux, which many of the survey participants said feels like a refreshing break from more complex project management-style tools.

When looking more closely at the benefit of simplicity, users say it comes down to being able to quickly prioritize and focus on one task at a time, along with having the flexibility to quickly jot down any tasks that come to mind down whether you’re at your desk working or on the move, without needing to add extensive details beyond the task itself. 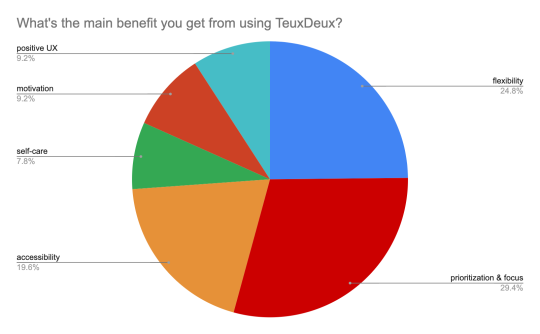 We were surprised and excited to see a good portion of users view TeuxDeux as part of their holistic self care. Especially in relation to people who expressed that they struggle with focus and/or frequently feel overwhelmed, they’ve been able to find some clarity in sticking to a simple system.

Also surprising but exciting: we saw the word “organized” come up a lot more than the word “productive”, which seems like a small nuance, but means quite a bit when you consider how loaded the idea of “productivity” has become. While the cultural narrative around productivity has morphed into machine-like self optimization, organization is productivity’s benevolent cousin; simply there to help keep your mind clear and focused on what really matters to you. We also firmly believe that becoming more organized allows you to ultimately be more productive.

We got some very, very nice compliments in this portion of the survey, which was great for our ego. We won’t toot our own horn too much, but here are a couple of nice comments we’re returning with a big virtual hug:

“I’m a very busy mom/worker/woman. I’m type ‘A’ and responsible for a household and many recurring and one-time tasks. With your service, I can stay organized in a way that works for me. Yours is the most impactful tool I use. Thank you so much for giving the world this magical helper.” “TeuxDeux is my favorite! People who don’t use it are just wrong. Thanks for helping me win at life! :)” “I LOVE TeuxDeux. I can’t imagine my life without it. I think I’ve been a user for 10 years now, and I tell everyone I know I literally (truly) can’t function without it. So thank you for making it!”

While the tippity top users of TeuxDeux aren’t necessarily representative of the entire body of users, the survey was a useful exercise to take a step back and look at where we can focus efforts in the coming months and year.

As a small but mighty team, our plan is to match resources available to urgency of needs, further broken down by quick, smaller “wins” and user-identified wants, validated or exposed by this survey on top of customer feedback channels. As always, we want to keep the spirit of TeuxDeux alive without skimping on the potential areas for spice and better user experience, overall.

Thanks to all who participated in the survey and we will absolutely have more coming out to our broader user base soon, so keep your eyes peeled!